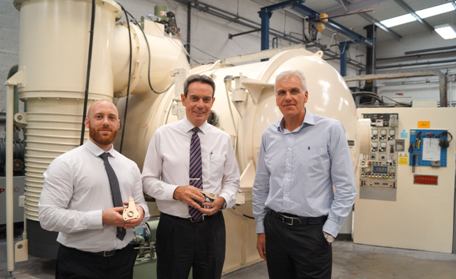 Acorn Surface Technology Ltd is a specialist surface treatment company based in Kirkby-in-Ashfield, near Nottingham in the UK, and has been a subsidiary of Aalberts Industries alongside AHC Oberflächentechnik GmbH since 2001. Originally formed in 1969, Acorn was established primarily to serve the precision engineering industry by offering hard, chromic and sulphuric anodising processes.

Over the following years, Acorn established a strong focus on the aerospace industry on the back of a high level of technical knowledge in the associated anodising and painting processes. With the growing level of OEM and customer approvals, including Airbus, Boeing, Bombardier and Rolls Royce, the company has always been on the lookout for new technologies to invest in, alongside the in-house process development activities.

There are a number of important stages within the production process for IVD aluminium coating on to metallic substrates. Firstly, the parts are degreased, to remove machining or dewatering oils. The next step in the operation is a fine mesh grit blast. This step performs two functions, the first is to mechanically clean the surface, and the second is to give a profile to the surface that has a high surface area, and aid the physical bond of the coating to the substrate. The final step occurs in the vacuum coating chamber.

The parts are held during processing on an electrically conducting jig. The jig can be static, or can move during the process, which can improve the distribution of the coating on more complex shapes.

The parts are loaded in to the chamber and a vacuum is drawn. A noble gas is then back-filled into the chamber, and an electrical charge is applied. This results in a plasma / ionic glow discharge which is clearly visible as a purple haze in the chamber, and results in a super-clean surface.
Once this is complete, the coating process can begin. Aluminium wire is fed into a series of superheated ceramic crucible. A high voltage is used to create very high temperatures, and the aluminium is then vaporised as an electrically charged vapour. The negatively charged aluminium atoms travel through the vacuum and on to the components. The charged aluminium vapour has an affinity to deposit on to the components, which are electrically "earthed".

The aluminium source can be moved underneath the components, which hang from a metal rack, allowing Acorn to coat large quantities of parts in one vacuum coating run. Another variation is to have a fixed coating source, and the parts moving into, and out of, the optimised coating area. Both methods have their benefits and are considered as part of the production process development.

Once coated in IVD aluminium, the components have a matt grey appearance, and need to be handled carefully. The next step is to close the pores in the outer surface of the coating by glass bead peening. The parts can be used as-is, or, more commonly, the pure aluminium surface is then converted to a aluminium chromate using a chemical conversion coating.

After coating, Acorn have the ability to determine the quality of the coating using a number of different inspection methods. Commonly, this can be assessed using an eddy current probe on ferrous materials, or for non-ferrous materials, such as titanium or copper alloys, dimensional assessments are performed.

Another great benefit of the IVD aluminium coating is that it can be painted with very little surface preparation. The chemically converted surface is an ideal pre-treatment for many paints including commonly specified fluid resistant epoxy based primer paints and dry film lubricants.

Acorn has traditionally had a strong focus on the aerospace and defence sector, both of which are well established industries in the UK. As part of this, Acorn were the first company in the world to achieve NADCAP accreditation for the IVD aluminium coating process.
The process is also approved for a number of major aerospace primary manufacturers including Airbus, Boeing, Bombardier, Leonardo, Rolls-Royce, Safran and UTC.

Components coated for these end customers can vary in size and complexity to a surprising extent. Through the barrel coating process, where parts are rotated in a barrel over a static source, a thin coating of IVD aluminium is applied in batched of typically thousands of small fasteners per batch.