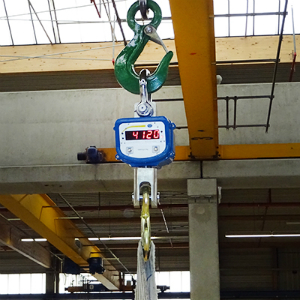 Earlier this year, PCE launched its new PCE-CS 10000N crane scales for industrial weighing applications involving heavy loads, up to 10,000kg, e.g. to weigh plane components or small planes. This product stands out by its very competitive price. Depending on the application, an alternative would be the PCE-DDM series which includes a hand-held device for easy readout and has a weighing range of up to 50,000kg.

The PCE-CS 10000N was included in PCE’s range of products to accommodate the low-cost segment and is already very popular in the aerospace sector. This new weighing instrument with a weighing range of 10,000kg and a resolution of 5kg comes with a 7Ah rechargeable battery for the main device, which lasts at least 50 hours.

It also includes a rotatable safety hook and a shackle, a charger, an infrared remote control with two 1.5V AAA batteries and a range of 15m, as well as an instruction manual. It fulfils the OIML class III standard.

The five-digit display with a character height of 30mm is easily readable even from a distance and the scales can be operated by a remote control, which makes the weighing equipment very user-friendly. The scales are equipped with a hold, a tare and an accumulation function. It also indicates low battery voltage. The dimensions of the scales are 264 x 206 x 745mm, with a weight of 30kg.

PCE Instruments manufactures and sells test equipment for a vast range of different purposes and applications, to a great extent under the label ‘PCE Instruments ®’, but they also supply devices from other renowned producers. They also provide pre- and aftersales technical advice as well as calibration and re-calibration services.