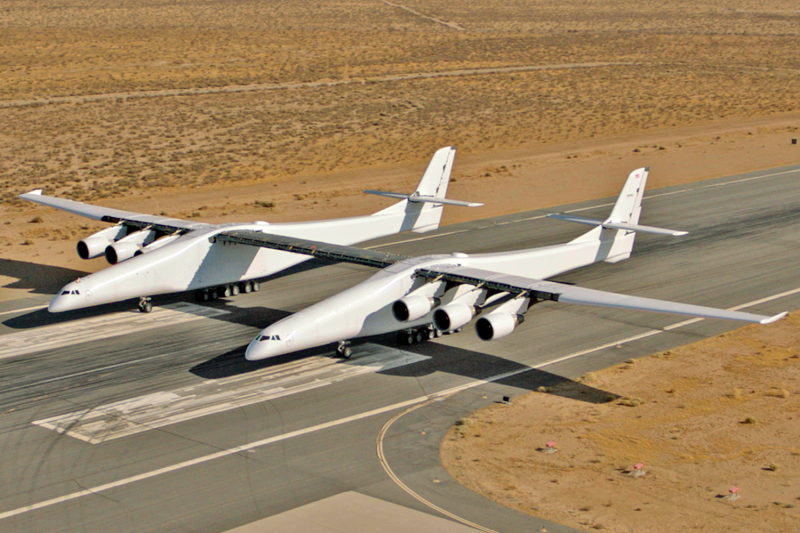 Powered by six jets, the double-fuselage plane will eventually be used as a mothercraft from which to launch civilian satellites into space.

The inaugural flight of the world’s largest aircraft could undermine the private space companies attempting to make ground-satellite launches profitable.

A big moment for the civilian satellite industry

Stratolaunch is the latest creation of renowned aircraft designer Burt Rutan. Powered by six jets, the double-fuselage plane will eventually be used as a mothercraft from which to launch civilian satellites into space.

Up to now, the nascent private space industry has been characterised by rocket-based designs, most notably the Elon Musk-founded SpaceX which uses extremely sophisticated self-landing and reusable rockets.

Despite being cutting-edge the Stratolaunch aims to blast commercial satellites into space more efficiently than is possible with ground launches. The technology is less risky than a rocket too, reducing risks and maintenance costs.

Capable of avoiding bad weather and variables that prevent ground-rocket launches will be a considerable competitive advantage provided the aircraft completes testing successfully and is pressed into action on the open market.

Doubts remain over the profitability of ground launches

Competition has already caused cost reductions in the launching of satellites by private companies. Even the combative Elon Musk-run SpaceX admitted that a business model predicated on civilian satellites may not be viable, and this whilst the private space industry is still in its formative stages.

If downward pressure on prices follows a similar trajectory to what has occurred in the passenger jet aircraft business, attaining viability for such companies will get even tougher.

The entry of Stratolaunch threatens to provide a means of lowering costs quickly in a relatively low-price way. Due to the complexity of rocketry and the higher risks involved than via the aviation route, this means of putting satellites into space could quickly become dominant.

Despite the advantages, threats remain

Stratolaunch was intended to be one of a family but will instead remain alone. Moreover, concerns about the future of the company were raised after its founder Paul Allen died in October 2018.

A big threat is a trend towards small satellites. The Rutan-designed aircraft is intended to carry large satellites into the high atmosphere to launch into space, but if fewer big satellites are built in the future then a key part of the business model will come under pressure.

Although highly sophisticated, it is possible that the aircraft could be left without the required number of customers for it to be profitable and alternative means of private satellite launches will be found to cater to developing customer demands.

Much remains to play out, making it hard to assess the threat against the young company. Getting the aircraft into service quickly and safely is now essential if the revenue required to adapt to future challenges is to be found.