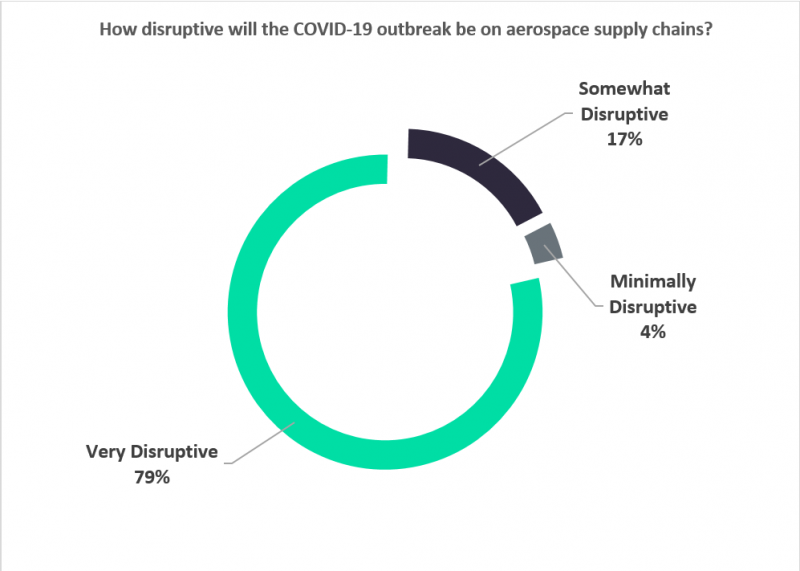 How disruptive will the COVID-19 outbreak be on aerospace supply chains? Credit: GlobalData.

A recent poll conducted by GobalData found that only 4% of respondents foresee minimal disruption to the aerospace supply chain due to the Covid-19 pandemic, highlighting dour sentiment in the aerospace industry. Around 79% of 242 responses characterised the impact as ‘Very Disruptive’, while a further 17% characterised the impact as ‘Somewhat Disruptive’.

Whilst the impact of the Covid-19 pandemic on large companies has been well reported, the subsequent disruption to smaller companies within supply chains has also been significant.

As the crisis enters its fourth month in Nato countries, key supply shortcomings are starting to be exposed. Beyond the cash injections providing a lifeline, smaller more specialised or niche components of the supply chain face existential threats from the slowdowns, such as the Airbus 1/3 drop in production.

With the lower-tier companies in the aerospace supply chain, such as specialist milliners, most vulnerable and likely to be financially untenable, further action is to be expected by primes who are well-positioned to survive the crisis. As the crisis continues and has already triggered longer-term production slowdowns and diminished markets and market certainty, vertical integration is going to start occurring.

The unsustainability of smaller supply chain members in purely financial terms is in spite of the critical importance of the components produced, and as such market consolidation will need to occur. While primes are likely to move to protect their supply chains, larger elements of the supply chain, such as tier-one suppliers will also be likely to acquire smaller chain elements where possible.

Key merger and acquisition decisions, in a number of directions, will be made based on the current market contraction, such as two of Boeing’s suppliers, Hexcel and Woodward Inc. (which derive 25% and 15% of their annual sales from Boeing respectively) abandoning their planned merger and commenced layoffs due to Covid-19 related demand reduction. Ultimately, one would assume the 4% of respondents who said they thought the crisis would be minimally disruptive would have seen this from a more bullish niche within the market.