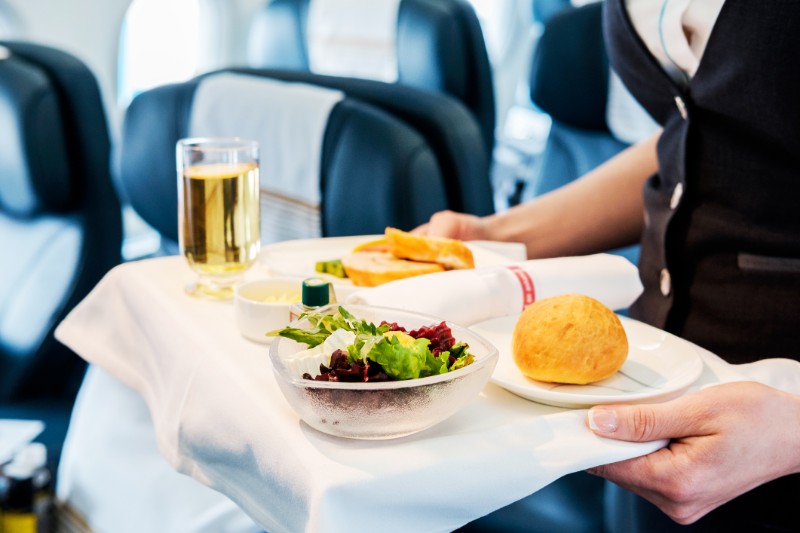 In-flight hospitality has had to adapt considerably to help reduce the risks of Covid-19 contagion on board flights. Credit: Aureliy / Shutterstock.

The air travel industry has been hit hard by Covid-19, and so have the industry’s food and drink suppliers. Almost all airlines now require passengers and staff to wear masks and other PPE, and have rules to restrict contact between cabin crew and passengers.

However, international services have begun to resume in several countries, which will gradually allow the travel and tourism industry to open up. In-flight hospitality has had to adapt considerably to help reduce the risks of contagion on new flights, with passenger capacities being limited, along with the introduction of disinfectant-focused cleaning throughout the day.

As Covid-19 is spread through contact, reducing those points of contact has become a key strategy for air travel. Pre-prepared meals are now being offered at the start of flights or have been phased out altogether, significantly impacting consumers and airline food providers.

Alcohol is both a diuretic, which means that after consumption, it is more likely that consumers will need to use the toilet. Consumers who need to use the toilet will be more likely to deposit the virus on, or pick it up from surfaces touched by multiple people. Alcohol consumption is also associated with increased risky behavior, lowered inhibitions and poor balance, meaning that it can reduce more conscientious, diligent behaviour, as well as making it more likely that passengers will bump into each other or touch surfaces that can host the virus.

How airlines approach the pandemic can vary. Air travel has been severely curtailed during the pandemic for obvious reasons; in April in the US alone, passenger traffic was down by 95%, and cancellations in some regions were up 5,000%. As such, the airlines are keen to get back to work while keeping passengers safe.

British Airways has reworked its approach to food and drink to reduce contact between passengers and air crew, having launched what it calls an ‘enhanced temporary catering proposition’ on 16 June. Long-haul passengers are permitted pre-prepared meal boxes including salads, hot entrées and sandwiches, as well as snacks between meals. The company has not suspended all alcohol sales, but it is not available on budget-class short-haul flights.

Southwest initially suspended its food and beverage service due to COVID-19, but brought back in-flight drinks and snacks on flights of more than 250 miles. Alcohol will not be served.